Would the Trump Administration Pass an ISO 9001 Audit?

If asked the question “should Donald Trump be certified?” I think many people would answer with an unqualified “YES!”

But what about a slightly different question: “Would the Trump Administration pass an audit to be certified to ISO 9001?”

Let’s have a look at that question from an auditor’s perspective, and see if we can give an educated answer…

Clause 5 of the ISO 9001 standard calls for “leadership and commitment…by taking accountability…ensuring resources are available…and supporting other management roles.”

Sorry, Donald, accountability is not your strong point. Taking credit for stuff, well, Trump is really good at that, but taking responsibility…not so much. He has taken credit for a buoyant stock market and pleasing unemployment numbers (Has that really happened because of your actions, Donald?). But when it comes to accountability – from denials of obvious truths, blame-shifting and over 16,000 confirmed lies since he took office, well, Donald, you are performing quite poorly with regards to accountability.

Has the Trump Administration ensured that “resources are available?” There are a horrifying number of positions unfilled within the USA’s federal departments. The Treasury, for example, has only 68% of positions filled, and the Agriculture Department only 62%. The Justice Department has a woeful 48% positions filled rate. Their overall rates are the worst in America’s history, and the reason for a huge number of these vacancies is that the administration just hasn’t bothered to nominate people to fill critical jobs.

Public Service Chief Max Stier has said that this failure to fill jobs creates unacceptable risks for the USA. “If you think about our government as a manager of critical risk, we’ve upped our risk,” said Stier. And we haven’t even reached clause 6.1 – Actions to address risks and opportunities, nor clause 7.1.2 regarding provision of persons necessary for effective implementation of the system!

Does the Administration “support management roles?” Well, the rate of turnover in Cabinet roles (including staffers and secretaries) is an incredible 80%. The most common reason for departures from this team is “Resigned Under Pressure?”  Does that sound like a management team that is receiving the support they require? 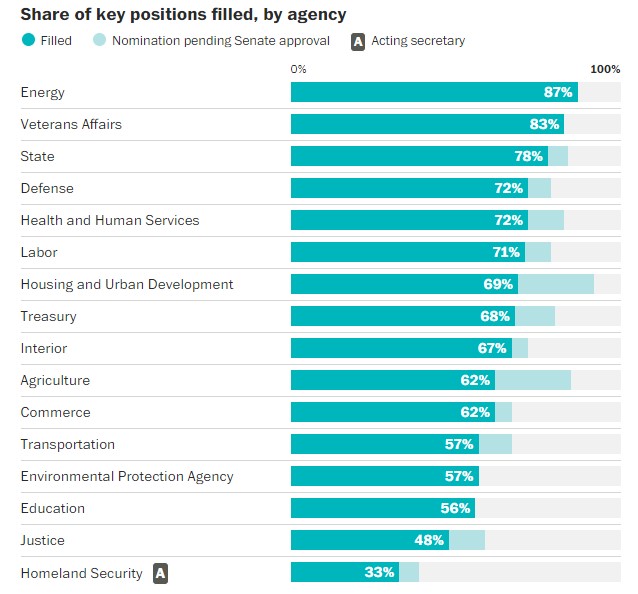 Now on to clause 7.2 Competence, which asks organisations to ensure that persons are competent in terms of education, training or experience.

Trump’s team includes his close relatives, large donors to his party, reality TV stars and a Secretary of Education who has no educational experience (aside from attending school as child) and whom once said that guns in schools would be useful to “chase away bears.” Wow, she really said that?

I’m calling it early. The Trump Administration are racking up a huge number of Major Non-Conformances. They have no hope of achieving certification to ISO 9001. We haven’t gone anywhere near the requirements for Performance Evaluation or Continual Improvement, but I think we know where the Trump Administration stands there.

So, if your organisation has achieved certification – congratulations, you are way, way ahead of the Trump Administration. Having said that, is there a solvent business in the world that is not better run than the current US government? That is an awful thing to say, but it is a self-evident truth.

Can someone point this out to American voters?